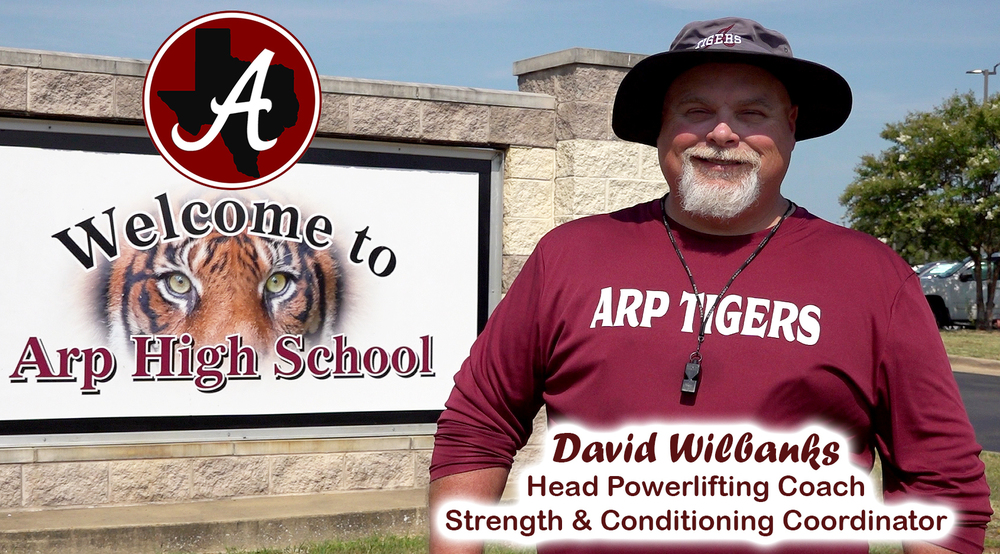 Another highly experienced and respected gentleman has come to mentor young people in Arp, America.

With nearly two and a half decades under his belt as a head powerlifting coach at the high school level, David Wilbanks becomes the Arp Tigers and Lady Tigers head man in that discipline, and assumes the reins of strength and conditioning coordinator for the school district.

He also takes over as the varsity football team's offensive line coach, and will be an assistant for the high school boys and girls track teams as well.

He joins Arp's coaching staff while serving as the current president of the Texas High School Powerlifting Association (THSPA).  He was the vice-president in 2021-22.

Since powerlifting is not a UIL sanctioned sport, the THSPA is the governing body for interscholastic competition in the Lone Star State.

Wilbanks' 24 years of coaching have also been spent on the gridiron, most recently at Malakoff High School, where he helped those Tigers reach the UIL state semifinals in 2016, the 3A Division 1 state title game in 2018, and the state quarterfinals in 2020.

As the running backs coach at Malakoff from 2016-22, Wilbanks coached a multitude of talented athletes including Deuce Hart and Keevie Rose, both of whom now play college football.

He also coached Super Bowl champion Louis Vasquez during his time at Corsicana High School.  Vasquez went on to become an All-American offensive lineman at Texas Tech, prior to being drafted by the then San Diego Chargers in 2009.  He helped the Denver Broncos reach two Super Bowls, winning it all in February of 2016.

Wilbanks has also been an offensive coordinator for nine years at Elkhart, and Rusk.

But with the weights, his teams at Corsicana and Palestine won four regional powerlifting championships.  In 2004, he led the Corsicana boys to a co-state championship.

A look at his bio:

He is married to Lisa Wilbanks, who is an assistant principal at Big Sandy ISD.

Growing up in East Texas, he graduated from Cayuga high school, before playing for Navarro College, and earning his degree at Stephen F. Austin University.