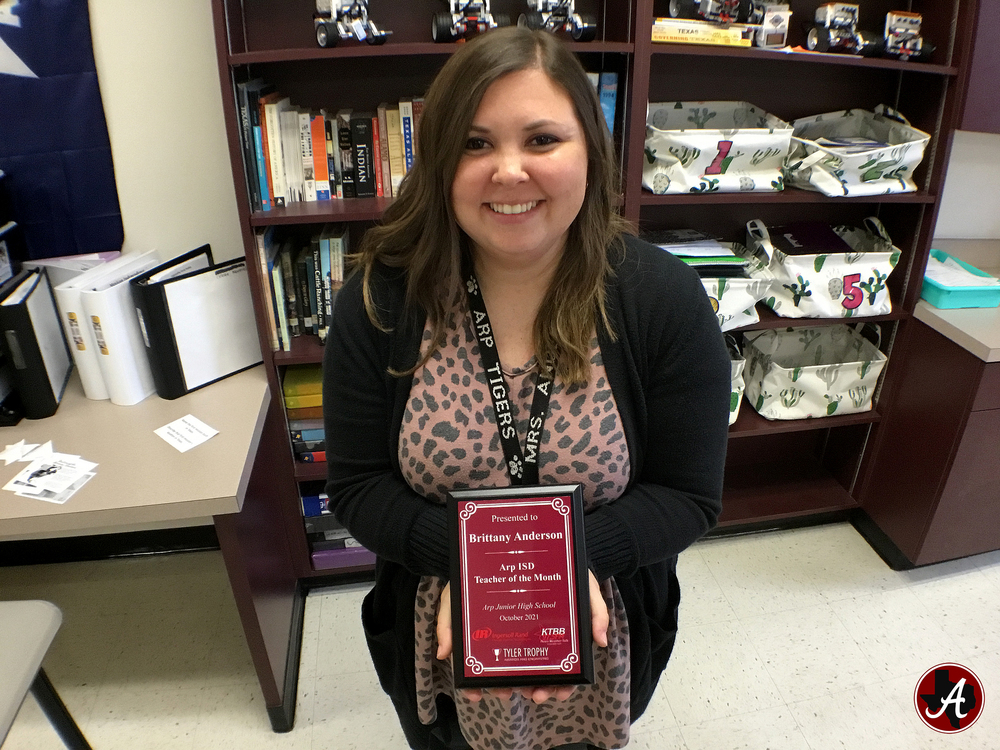 It took her quite some time to reach her desired goal of becoming an educator.

Not only is Arp Junior High Texas History and Robotics teacher Brittany Anderson realizing her dream, but in just her second month as a classroom leader, she's earned the district's prominent distinction as the KTBB Radio Arp ISD October Teacher of the Month.

"It means so much.  I worked so hard to get here.  I have three daughters, and so it took me a while to get to this point.  And so to be teacher of the month my first year, just gives me chills," Anderson explained.

Anderson originally went to school to pursue a career in physical therapy.  But something changed her mind.

"I just liked working with the kids in those connections that you make with the kids, the relationships you build, and just knowing that you've made a difference," said Anderson.

She also became a wife, and a mother of three.

In 2014, Anderson joined Arp Junior High as a teacher's aide.  Two years later she moved to the Library, and spent the next four years as the junior high library aide.

Throughout that time, she took college courses hoping to one day become a teacher.

"That's where I've always wanted to be, in the classroom," Anderson explained.

But at times she felt as if there wasn't much light at the end of the tunnel.

"it was difficult.  I felt like quitting several times," said Anderson.  Yet, she persevered.

Always a big history fan, when the opening for the Texas History position came about earlier this year, she seized it.  Anderson made sure she finished her degree from Stephen F. Austin State University in time to take advantage of the opportunity.

"To finally be here, I wanted to be here (because) I wanted to make that difference," Anderson stressed.

She also explained her love for her favorite subject throughout school.  "It's just something that kind of drawn me in.  I want to learn as much history as I can.  I like traveling and learning about history."

In addition, she got a chance to learn something new along the way.

"Robotics just kind of fell in my lap. I wasn't real sure about it at first, but I've gotten to where I like that too," said Anderson.

And she made certain she was prepared to teach the subject matter.

"It's just the creativity of it.  As soon as I learned I was going to teach it, I started digging into how do you do certain things with the robot, how are they going to build this.  And I've come to love it, actually, just trying to learn as much as I can about it so I can help the kids.  They get to be creative," Anderson explained.