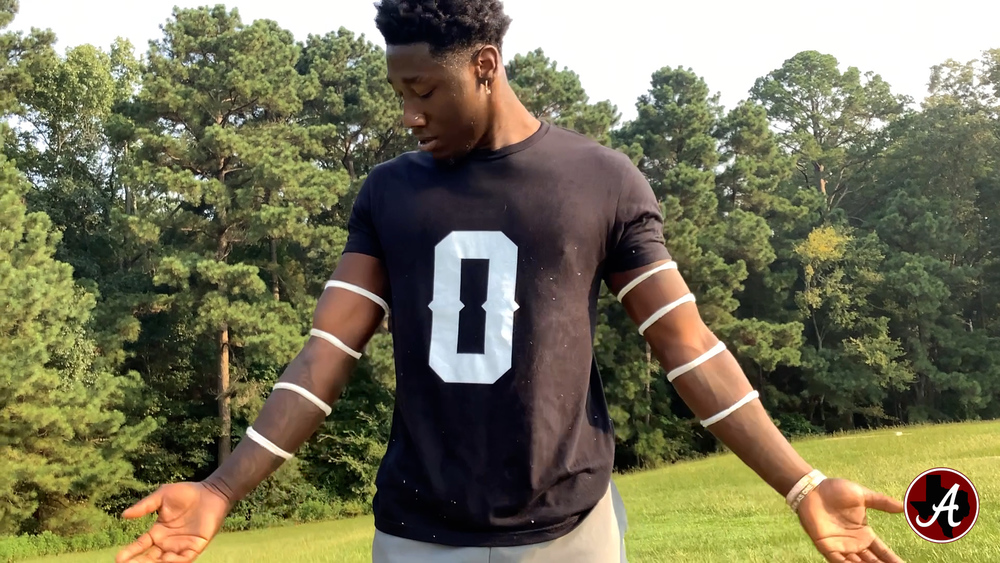 Tiger alum DeMarvion Overshown has become one of the top defensive players in college football.

"Knowing that I got this strong community by my side every Saturday, just going out there, putting on for the town of Arp.  It sticks with me.  And that's one reason why I get up every day and do what I do in Austin, because I know a lot of people in this city are watching me, depending on me, and believe in me," said Overshown.

A sentiment he proudly wears on his sleeve as he prepares for his final season as a Texas Longhorn.

“Being from this small town and coming back and knowing, you know, people still love you, no matter what you do.  It's a very close community.  And, you know, I was blessed to be able to be raised here, he explains.”

Overshown enters his senior campaign as a Butkus Award candidate, a prestigious distinction that goes to the best linebacker in the country, which is a position he only began playing a year ago.

“I felt like what I've been doing since I've been there and that the work was finally going to pay off.  And so just being named to the preseason list is an honor.  But, it's still more work to be done to go get the award at the end of the year,” said Overshown.

Having worked his way back from offseason shoulder surgery, Overshown hopes he can build on the way he finished last season, helping lead the Horns to a lopsided Alamo Bowl victory as the game’s defensive MVP.

“Really just being the leader that everybody sees me as, taking the role of past leaders that I've seen coming up, just keeping the group together.  Because I expect big things out of this team this year,” said Overshown.

And even though he had to miss spring practice, he’s already liking what he sees from new head coach Steve Sarkisian.

“When Coach Sark first got there, we actually had a pretty good conversation. And I just knew from there, like there's a guy that I would love to play with. Uh, because you know, he's straight forward. He knows what he wants.  He knows what it's gonna take to get there because he's been there.   He knows what we need, the little bit that we need, the pieces to put together in order for us to get to that next level,” said Overshown.

Speaking of, what has reached a whole new level, is his Arm-Bandit game.

“I actually started doing a while back.  People didn't really notice though, but I got pictures from junior high and high school.  I was wearing not as many as I do now, but I was wearing them.  This came from me just being creative, really engaging with the fans, you know, fans bet on how many I wear this game.  Fans have asked me, I bet you can't do this, I bet you can’t do that.  So, you know, I just had fun with it going along with the season.  That's all, that's what it's all about, having fun while I'm out there,” Overshown explained.

And of course, that’s only half of a brand he has created.

“I tied them together sometimes, you know, Agent Zero is one person, but then you got the Arm Bandit, and they just correlate together,” said Overshown.

But if not for a twist of fate, Agent Zero would not be part of his repertoire.

“I was actually supposed to be number one last year, but something got mixed up and Coach Herman ended up giving it to another player, but he tried to give it back to me.  I was like, no, it's cool, I just wear zero.  And you know, I wanted to be the first person to wear zero anyways, on the defensive side of the ball.  So I felt history, and then I felt honored to be able to wear number zero.  And they just correlate with my last name too.  And then the Agent Zero thing came along later, but I didn't even name myself that somebody on Twitter commented Agent Zero and it just stuck with me.  I knew I had heard it before.  And I looked it up.  People used to call Gilbert Arenas that.  So once I looked it up and I saw that, I like, yeah, I'm liking that,” said Overshown.

Better yet, with the NCAA now allowing student-athletes to profit off their name, image, and likeness, Overshown has launched a merchandise line with his trademark images on LastStandHats.com.

“People that came come before me, legends, Vince Young, Colt McCoy, Sam Ehlinger, all of them guys, they would have made fortunes and his NIL deal, but basically giving college athletes a chance to, you know, market off their name because I mean, the NCAA is doing it for four years. So I feel like giving other people opportunities to do stuff while they're in college, while they got a huge platform, if they don't make it to the next level, just to get something started.  You never know, you might not need the next level,” said Overshown.

But the pro football ranks are now certainly within his reach.  Part of the reason he continues to seek advice from a longtime mentor in Arp’s head football coach Dale Irwin.

“Me and Coach Irwin we talk just about everything going on with this upcoming season and then what's to come after that.  You know, just be careful, because a lot of people that are gonna come back around that you haven't seen in a while,” points out Overshown.

And while he’s focused on helping U-T contend for a Big 12 title, he hopes his accomplishments can be an example for the youth of East Texas.

“Once this season wraps up, I'm going right into training.  It's going to be a dream come true.  Showing young people that it's possible, you know, to make it out of this little small town,” said Overshown.

Finally, what about his Longhorns going to the SEC, Overshown believes it could indeed change the landscape of College Football.

"I've already is seen it firsthand.  Like college football is going to be way different when the changes do happen.  And I really doubt that it happens 2025.  I feel like it's going to happen way earlier.  People trying to move around right now after just hearing that it was going to happen.  It's definitely going to be different, especially with the expansion coming in the college playoffs," said Overshown.

Texas opens the season on Saturday September 4 in Austin against the Louisiana Ragin' Cajuns at 3:30 p.m.

Overshown plans to make a tribute with his arm bands for his late teammate Jake Ehlinger in the Horns opener.

The contest will be televised in East Texas on FOX 51.